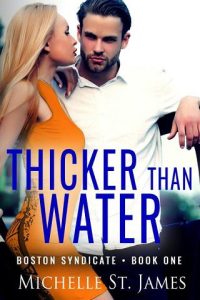 He’d joined the Syndicate to learn how to be a man. Pissing off his socialite mother was just a bonus, as was hanging around South Boston with Bridget Mongahan and his best friend Will. But that was before Bridget dumped him without explanation. Forced to pick up the pieces, Nolan returned to law school and set about fulfilling the real purpose of someone of his station — making money.
Bridget Monaghan has never been ashamed of her working class upbringing. She loves everything about Southie, loves living with her parents and brother in their small row house and knowing everyone she passes on the sidewalk. Going to night school to become a lawyer was a way to do something meaningful with her life, a way to make the world a better place. Then her brother was diagnosed with ALS and she was forced to make the most painful decision of her life — let Nolan Burke go to save her brother.
Four years later, Bridget is working as a lawyer for the Irish mob, trying to cover the expense of her brother’s medications and treatments, when she finds herself in the crosshairs of a war between the Syndicate and a former I.R.A. operative running the criminal organization in South Boston. When the Syndicate asks for Nolan’s help, he and Bridget are drawn into a deadly turf war that will force them to decide if they should save themselves — or risk everything for love.