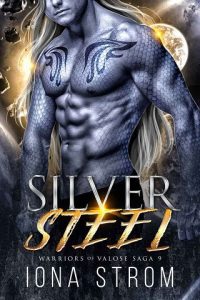 Nekko
My mission was to lead a squad to the spacecraft that the females had crashed in. We were to search and strip the crash site of all its power sources and return them to Huren. Easy enough for a seasoned warrior like myself, except I hadn’t counted on the Nuttaki horde who had swarmed us. Outnumbered, I had been knocked unconscious and taken captive.

I woke alone and with the salty scent of the sea drilling into my sinus cavities, and I knew where I had been taken. My days were numbered if I couldn’t free myself. As I laid shackled, all I could think of was getting back to the female who had finally awakened me, to return to my Gia before the Yulineon’s attacked again. I would do anything to return to her, even if I had to forge an alliance with my enemy.

Gia
Nekko was lost, and I was, once again, alone. He had been the one person on this dangerous, alien world who had made me feel safe. He was my steel, the sword that protected me against my fears. I mourned the lack of courage to tell him how I felt. I had wanted to, so badly. Nekko was fearsome, and I was just a virgin who had no experience with boys, much less with a formidable warrior elf. If the search team was unable to find him, the moment might be lost forever.

Author Note: The Warriors of Valose Saga is meant to be read in order. Each book does have a HEA. However, this is a saga and titled accordingly because the story takes place over a lengthy period of time.