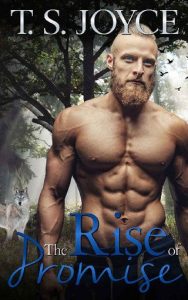 The Rise of Promise (The Wolves of Promise Falls #2) by T.S. Joyce – Free eBooks Download

Rock bottom feels like home to Stark Wulfson. What he can’t cope with are meaningful relationships, so he’s bounced around from werewolf Pack to werewolf Pack, fighting anyone who so much as looks at him wrong. His nomadic life has come to an end when he lands in a Pack under the new Alpha, Daylen Hoda. The Promise Falls Pack is terrifying to a man like Stark for two reasons. One, if he allows it, the wolves here could be friends, but friendship comes at a very steep cost to his inner wolf. And two, there is a beautiful, mouthy, tough-as-nails but completely vulnerable fox shifter female hanging right on the outskirts of Pack territory. Something with very sharp teeth is hunting Lyndi Mosley, and normally, Stark wouldn’t sign up to be anyone’s hero, this this sexy little vixen is becoming more and more interesting by the day. It isn’t just the hell that she’s enduring that has his wolf yearning to protect her…it’s the way she’s handling the storm. Lyndi is a rare find, and a delicious challenge for a werewolf in need of a good fight.

Lyndi Mosley is going through a complete overhaul of her life, and right in the middle of that transition, in steps a testy werewolf with control issues. It’s clear as day that Stark’s inner monster runs the show, but in his own strange way, he is stepping up to bat for her. She always thought the Lost Wolf hated her. Truth be told, she always thought he hated everyone, but he’s showing her a tender side she didn’t know existed. He’s hot and cold and confusing…here one day and gone the next, but the more she finds out about Stark’s secret life, the more she thinks there may be more to him than even his own Pack realizes. And even more interesting…no one has figured out what he really is yet. No one but Lyndi.

Nothing is what it seems in Promise Falls.