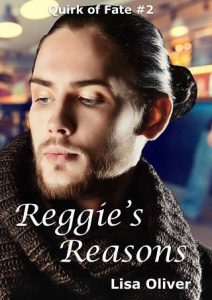 Ever since he went through his awakening at fifteen, Reginald Forsyth (“Reggie”) had received mysterious notes on his bathroom mirror every birthday. Initially supportive, the notes got progressively more flirtatious as he got older. Now, one day from his twenty-fifth birthday, Reggie is about to be an adult in vampire terms, and ready to meet his admirer.

After shouting off his big mouth, Dirkin spent ten years in the shadows, watching his mate grow from a teenager into a handsome and sensitive adult. Now all he wants is to see if holding the mans of his dreams is as good as he’d imagined. He could have done without some of Reggie’s questionable friends, but with his mate by his side, there wasn’t much Dirkin couldn’t handle.

Or so he thought. A sultry cat-shifter, a goth vampire, Dirkin’s best friend Balthazar, and a karaoke machine all have to be dealt with before he and Reggie get their HEA. And an Italian chef gets a mention too. There’s no question here if Dirkin and Reggie get their HEA – the only question is whether or not they’ll have the energy left to enjoy it.

Reggie’s Reasons is the second book in the Quirk of Fate series. Quirk of Fate is a series of independent standalone stories that have no attachment to others in the series except by the quirky and different ways Fated Mates can end up meeting.

This story is 46,000 words, and includes some violence, intimate situations between men, and adult language. It is intended for adults only. Please store your ebooks responsibly.