Home
contemporary romance
Freak Like Me by Gypsy Reed (ePUB) 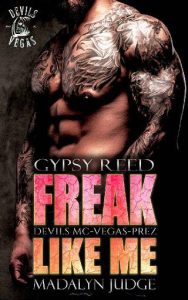 “It takes one to know one, babydoll,” – xoxo Freakshow
It’s lust at first sight when I spy the sexy little showgirl busking on my boulevard. She quickly becomes my obsession, snarling at me with her claws out, refusing the truth I see reflected in her eyes. She wears propriety and civility better than her glitzy costumes, but her normalness is just a mask, a lie to hide what she fears the most… the truth.
She’s just a freak like me.
“It’s possible to be the hero of your story while still being the villain of someone else’s,” -xoxo Babydoll
He’s wild.
Impetuous.
Dangerously handsome.
Refuses to stop calling me ‘Babydoll’ for some insane reason.
Oh, and this crazy biker truly thinks he’s the king of Sin City!
But the worst part of being coveted by a Devil called Freakshow?
It’s when he claims I’m His…
because I’m afraid he may be right.
The Vegas Devil’s charter is nicknamed the Circus. Sounds like fun don’t it?
Only if you’re one of Freakshow’s loyal brothers. Everyone else better not fuck around in their backyard. Nothing happens in Sin City’s seedy underworld without his okay. He’s the Motherfucker you pay to play around on the dark side; it doesn’t get any filthier than the Vegas Devils.
There are no angels in Sin City. Innocence is a handicap, not a virtue and naivety will get you a nice long dirt nap in the desert. Freakshow doesn’t rescue damsels, he’s the asshole who puts them in distress. But something about the pretty new showgirl in his city has him bending all the rules.
And he’s about to discover that every man, even a badass outlaw biker, can reach a tipping point.
Now there’s something he wants more than his club, his brothers, his debaucherous kingdom in Sin City.
But can his Babydoll survive his depraved criminal world?
Or will he be forced to let her go forever?