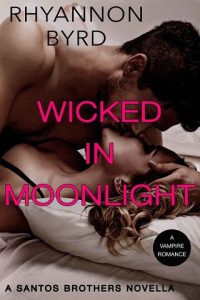 Lainey Maxwell knew right from the start that this would be the vacation from hell. After all, she’s merely pretending to be a “tourist” in the beautiful beach town of Moonlight Bay so that she can search for her missing brother. But when Lainey finds herself the target of a deadly group of werewolves, suddenly she’s the one who needs rescuing. And to compound her problems, it isn’t the police who clutch her straight from the jaws of danger, but a gorgeous local named Nick Santos.

After they’re forced to take shelter in an underground bunker, the hard-edged, mysterious Nick is all that stands between Lainey and the bloodthirsty wolves trying to claw their way in. But Nick poses his own serious threat to her safety. One that will either destroy them both…or prove to be the only thing that can see them through to the light of day.

Wicked in Moonlight originally appeared in the Darkest Desire of the Vampire anthology.