Home
contemporary romance
Under His Protection by B. Love (ePUB) 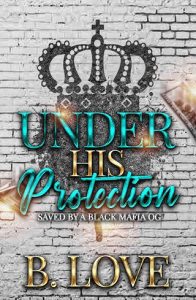 Under His Protection (Black Mayhem Mafia Saga #4) by B. Love – Free eBooks Download

Savant Black is a protector. More logic than emotion, he places emphasis on his present reality above all. When his sister suggests he speak with a life coach, Savant doesn’t believe she will be capable of opening his eyes and mind to any life altering revelations. However, the longer he works with Addison the more Savant realizes his need to feel so little comes from desiring so much.

Addison Gray takes pleasure in helping other people rewrite their life stories because she was forced to rewrite her own. When one of her most difficult yet rewarding clients recommends her services to Savant Black, Addison isn’t prepared for the attraction she feels toward him. No matter how hard they try to remain professional, things eventually turn personal… especially when a problem from Addison’s past pummels her present.

When secrets are exposed and plans of betrayal unfold, Savant commits to protecting Addison’s body while she protects his heart. For a man like Savant, loyalty and honesty are everything. Will the lies that Addison built her new life on ruin their relationship before it fully begins, or will she be the reason he learns to prioritize love over logic and everything else?