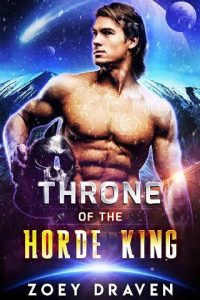 High in the icy northlands of Dakkar, I’ve lived a sheltered, predictable, and safe life. My days are spent caring for an ancient temple and staying out of the priestesses’ way. My nights are spent pouring over the great stories of warrior kings and the queens that stole their hearts.
But I have a secret.
I’m a hybrid female. Half-Dakkari, half-human, the first of my kind. The priestesses have risked everything to keep me hidden from the dangerous hordes that roam the wild lands and the greedy king that sits on the throne in Dothik. I am the secret they could never let free.
Then a horde king—with molten eyes and the body of a battle god—shows up at the temple’s gates, demanding entry.
He’s the one I see in my dreams, all ruthless, merciless strength and a tempting smirk to match. Only, he’s not the gentle male I always imagined. He’s cunning, sensual, cruel…and he thinks that everything has a price. Even me.
With a growing danger in the east and a precarious throne in the west, he steals me away from the sacred temple with daring plans all his own.
He thinks I’m a naive temple girl, who will bend easily to his demands. Instead, I fight him at every turn, showing him claws of my own. Instead of fear, lust begins to rise between us—hot, addicting, and forbidden. His teasing touch makes me tremble. His stolen kisses make me weak.
But the horde king of Rath Serok is as mysterious as he is devilish.
And he has his own secret…one that will forever change the future of Dakkar.