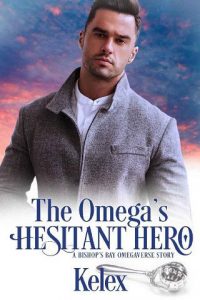 Newly returned from an overseas tour, ex-Army medic McCoy Cavanaugh is readjusting to civilian life. He’s taking what he learned in the military and enrolled in med school in a bid to rise above being born on the wrong side of the tracks. The last thing he needs in his life is an omega throwing his plans into chaos, especially one who’s way out of his league.
Jackson Bishop, yes from those Bishops, wants nothing more than to stand on his own two feet. After the death of his parents, he was cocooned within his wealthy, conservative grandparents’ world. Independence from the weight of their sheltering leads him to enroll in the local university. Who cares if his grandparents only agreed because they assume he’s there to catch an alpha?
Catch an alpha, he does—much to his chagrin. Neither McCoy or Jackson are ready to take on a relationship yet can’t seem to fight the magnetic pull of the other.
Even if they finally choose to be together, McCoy fears Jackson’s family will never accept him… especially when there’s someone close who doesn’t want to see their happily ever after arrive.