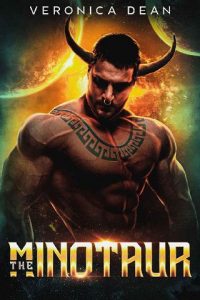 We were always told that monsters were real. I never really believed it until now.

My name is Nayli. Well, it used to be Nayli, back in my exiled human colony on an isolated moon. Now I’m just another inmate aboard this prison spaceship, headed for a hell planet.

It doesn’t matter that I’m innocent; the Galactic Federation has mistaken me for one of its most dangerous criminals, and now my future has been ripped away. I’m surrounded by horrific monsters, and one in particular won’t stop staring at me. His massive horns, rippling muscles, and intense, golden eyes make me feel so small. I don’t know what he wants, but if he’s in here, it can’t be good.

As the guards lose control of the ship and the monsters are released, I realize that this brooding warrior might be the only chance I have at survival. But, he doesn’t just want to help me, he wants to possess me.

All I have known is loneliness. All he has known is bloodshed. Somehow, our destinies have become intertwined.