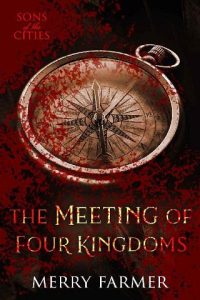 The stage is set. The leaders of the four most powerful of the new kingdoms on the frontier have gathered for a summit that could change everything for wolves and city-dwellers alike.
But the meeting is also a chance for the Sons of the Cities to reunite…and to argue over the ever-changing problem of pupdom. Is it right for men who were once pups themselves to own their own pups, or will that undermine everything the Sons have been working for?
And there are even greater problems on the horizon when a spy is discovered among the men King Sai has invited to form a new order—a spy who represents the Old Realm and the claim that King Julius still believes he has on all of the frontier.
Will the meeting of four kingdoms unite the people of the frontier or divide them even further? And will the Old Realm wage a war to reclaim the frontier…or has the war already begun?