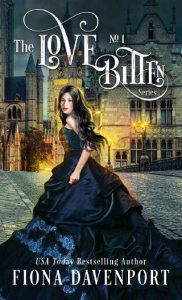 The writing duo of Elle Christensen and Rochelle Paige team up under the Fiona Davenport pen name to bring you sexy, insta-love stories filled with alpha males.

Dusk Before Dawn
Kieran Bancroft has spent almost a thousand years saving humans from evil vampires. Protecting potential consorts from nightwalkers gave Kieran something to focus on other than his dwindling hope that he’d ever find the one who was meant to be his.

Thana Fernsby had no idea vampires existed. Not until her aunt sprung an arranged marriage on her, and she went running into the night. Thana ended up at the door of a daywalker–the good kind of vampire that had been born instead of bitten.
Kieran would help any damsel in distress. But when he touched Thana and discovered she was his destined consort, the fight became personal.

With the Sunrise
Athan Bancroft was drawn to a ring with a striking amethyst a century ago and has been wearing it all those years. He had no idea the piece of jewelry was meant for his destined consort—until he looked across a crowded ballroom straight into eyes that were a perfect match for the stone.
Selene Brassard has always been fascinated by stories about vampires, but she had no idea they really existed. Or that she’d spend the rest of her very long life with one.
But will what her parents think they know about the vampire world destroy what Athan and Selene are building together?

The Blackest Night
Stephan Bancroft was happy for his brothers, but seeing them blissfully settled made him feel the lack of his own consort even more. Taking on extra missions for the vampire council didn’t help. Nothing would except finding the woman who was destined to be his.

Bronwyn O’Brien had no idea vampires existed until she was attacked while walking home from a party. When Stephan rescued her, Bronwyn also discovered she would spend the rest of her life with the gorgeous daywalker.
But will Bronwyn ever feel as though she truly belongs in Stephan’s world?