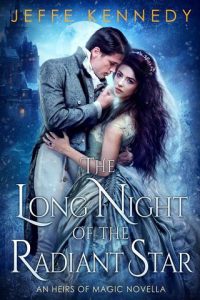 At long last, Jakral Konyngrr—lowly sailor, gambler, and sometime rogue—has won the heart and hand of Princess Stella of Avonlidgh. Never mind that Stella’s mother is determined to make their wedding the event of the century, he’s happy to endure any trial to marry the love of his life and his guiding star. Very soon they can sail away together into the rest of their lives. Unfortunately the wedding becomes delayed for several months, until midwinter.

Stella—sorceress, empath, and bearer of the mark of the Tala—has been through great trials. But nothing has tested her as sorely as her passionate and flamboyant mother planning their wedding. Even Jak’s steady love and companionship isn’t enough as Stella finds herself crumbling under the pressure of being snowbound in a castle with the press of so many minds and emotions. When she lashes out, she hits the worst possible target, jeopardizing her chances for happiness.

With several kingdoms and a former enemy empire bearing down on them, Jak and Stella’s wedding on the longest night of year might not happen at all… Unless they can create their own happy ever after.