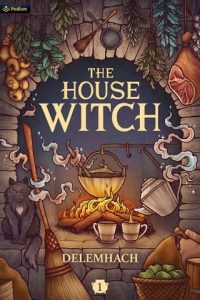 When Finlay Ashowan joins the staff of the King and Queen of Daxaria, he’s an enigma. No one knows where he comes from or how he came to be where he is, which suits Fin just fine. He’s satisfied simply serving as the royal cook, keeping nosy passersby out of his kitchen, and concocting some truly uncanny meals.

But Fin’s secret identity doesn’t stay hidden for long. After all, it’s not every day a house witch and his kitten familiar, Kraken, take to meddling in imperial affairs. As his powers are gradually discovered by the court, Fin finds himself involved in a slew of intrigues: going head-to-head with knights with less-than-chivalrous intentions, helping to protect the pregnant queen, fending off the ire of the royal mage, and uncovering a spy in the castle. And that’s only the beginning—because Fin’s past is catching up with him just as his love life is getting complicated . . .