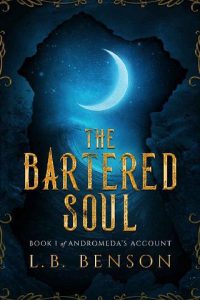 Andromeda is a priestess without a temple.

She escaped the horrific fate her sister priestesses faced at the hand of the Usurper King’s men years ago and has resigned herself to a life in a brothel, hiding from her past and those who would wipe the priestesses and their Goddess from memory.
Captain William Lennox is a pirate with an unsavory and violent reputation.
After years of avoiding the notorious Captain Lennox, Andromeda finds herself ensnared by the rogue. She begrudgingly accepts her fate – to accompany the handsome, yet dangerous, pirate on his latest voyage across the sea; both as entertainment for him and his crew and to keep watch over a younger girl trapped in the same bargain. It’s the only sure way to earn their way to a new life across the ocean, safe from the King’s bigotry.
Despite her best efforts, Andromeda finds herself surrounded by reminders of who she was before her future was taken from her.
Can she continue to wear the mask she has donned for almost a decade and escape her past for good? Or will her traitorous heart push her toward a new future solidly entwined with the painful secrets she has tried so hard to forget and the Captain who harbors secrets of his own?