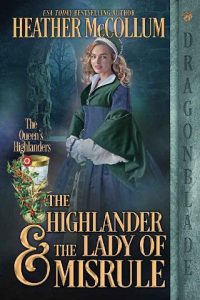 Will the Lady of Misrule fall to the assassin’s poison during the twelve days of Christmas?

Greer Buchanan, a Scottish soldier for King James, arrives in London as it prepares for the festive twelve days of Christmas. Tasked by his king to stop Queen Elizabeth I from being assassinated, Greer heads to Whitehall Palace only to be misdirected to the Bear Garden where a rescue effort is underway.
Lucy Cranfield, a lady of Queen Elizabeth’s court, is determined to save the weak, which includes the dogs sent into the bear fighting ring. With her family name tied to a traitor, she keeps it hidden when she enlists a Highlander to help her elude the guards during her freedom raid on the dog kennels. With two puppies in tow, she leads him to Whitehall to meet with the queen’s Master of Security.
Greer discovers that Lucy belongs to a family of traitors, which moves her to number one on his potential assassin list despite her daring rescue and easy smile. When the assigned Lord of Misrule is mistakenly poisoned during the Christmas feast, Lucy is chosen to fill his vacant spot as the Lady of Misrule. With an assassin walking the corridors of Whitehall, Greer and Lucy fight the growing fire between them so they can focus on uncovering the true assassins in Queen Elizabeth’s court before they strike again.
Suspicion turns against them, and their passion grows into a tempest, as they run out of time to save the queen and themselves.