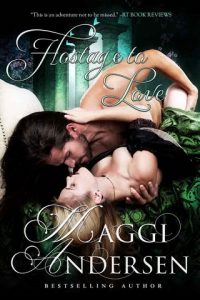 It is 1792, and Viscount Beaumont has buried himself in the country since his wife died. But now his daughter, Henrietta, has come of age, and he must squire her in her London Season. Verity Garnier is an actress whose father has been thrown in a French dungeon. To free him, she must deliver Anthony Beaumont in trade. She travels to London to seduce Beaumont into following her to France. She doesn’t plan on falling in love.

When Beaumont goes on his own to France to save his brother-in-law from the guillotine, Verity follows him, reluctantly taking along his daughter, who refuses to be left behind. After soldiers of the Revolution capture Beaumont and his brother-in-law, Verity and Henrietta must find a way to save them. Christian Hartley, a British agent whom Henrietta plans to marry, joins their fight. Will everyone find a safe way home, or will they face the guillotine?