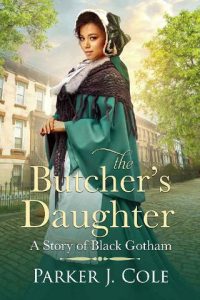 A woman sent to retrieve a family’s son, a man tired of living a lie, and a scandal that brings them together.

Elsia Letchmore was intent on marrying her childhood friend until he left her and New York behind. She tried to console herself and put the man who rejected her due to her family’s business out of her mind. Now, she’s tasked with finding Zelpher Knight and bringing him to home New York’s Five Point District.

Zelpher Knight dreamed of being on the stage, but opportunities for a colored actor in 1846 were non-existent. Spurning his parents’ wishes for his future, he leaves New York and the only woman he has loved, to find the world isn’t ready to accept him. He starts on the greatest acting career of his life – living a lie. When his identity is discovered, he is shunned from the theater community. Angry, alone, and financially destitute he doesn’t expect to see redemption in the form of an angel from his past.

Returning home is harder than either of them expected as race, class, and freedom collide. Can the disgraced prodigal son ever find love and healing with the Butcher’s Daughter?