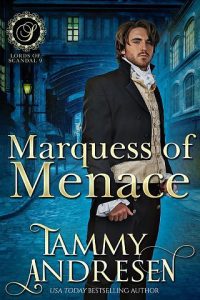 He’s a rake beyond redemption…
The Marquess of Milton was the sort of handsome that made women swoon at his feet. Which suited him just fine. Of course, no mother would allow him near her daughter, which worked even better. Who wanted to tangle with a woman he might have to marry? But when his path crosses with Miss Eliza Carrington, a woman who is both strikingly beautiful and as fiery as they come, he knows he has to have her. And when he realizes there is no marriage minded mama to contend with… it’s time to be wicked.

She has no time for games…
The Marquess of Menace? That’s what they called him? Eliza rejects the name from the first. It implies there is something dangerous about this man when really he’s just an overgrown child. One who wanted to play at sin and dance away from the consequences of life. She’ll have none of it. And if he thinks his cute lines and his handsome face will have her falling in his bed, he’s got another thing coming. She’ll teach him a few lessons about playing with a woman’s affection that he’ll never forget.
But when danger comes knocking at her door, it’s Menace who is there to fend it off. And when his arm slips about her in comfort, she has to confess that’s it’s as strong as it is comforting.

And the reckless beating of her heart. Surely, that’s a mistake.