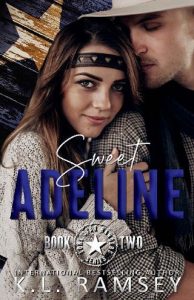 There wasn’t much that was sweet about Adeline Holloway’s life, but she was hoping to change her luck. When her ex-husband left her with nothing but her daughter, she decided to pick-up the pieces of her life and start fresh. She joined the police force and became one kick-ass detective, even if she did say so herself. Adeline thought she was finally getting herself together until she was abducted at gunpoint by the sexiest FBI agent she’d ever met. Dalton Landry needed help and she found herself agreeing to give it—even if it cost her everything. And, this undercover assignment just might cost her more than she bargained to give up—including her life.

Landry was out of options and kidnapping his old friend’s sister-in-law seemed like a good plan at the time. He needed Anders Taylor’s help and the FBI’s backing to clear his tarnished name. Abducting sweet Adeline Holloway felt like his only way out of the shit storm he found himself in the middle of. When she volunteered to help him, he knew that he should have turned her down. Instead, he took her up on her offer and dragged her right into the lion’s den. Getting her involved in the human trafficking ring that threatened to ruin him wasn’t his finest idea, but what else could he do? His life depended on Adeline’s help, even if she lost everything giving it.