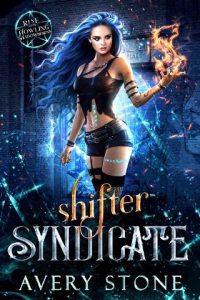 The ultimate punishment for protecting a Shadowborn is death…

Plagued by the memories of my slain pack, I disappear into a shadowy survival, rejected by a universe that has never wanted or accepted me — Selene Bleu, one of the few surviving Shadowborns.
As an orphaned pup, my life should have remained as it has been for the last fourteen years. But it all burns to hell the night of the Howling Ceremony, and I’m left in a pit of forsaken shifters — rejected by my newly found mate and awaiting death at the hands of the Four Alphas of Shifter Syndicate.
Instead, I’m unexpectedly chosen by Alpha Asher of the North Syndicate and whisked to an underground world where darkness thrives. The only problems now are my defiance, inability to follow rules, and my growing desire to slip into Alpha Asher’s chambers.
But those issues can be costly because I’ve learned one important thing:
At Shifter Syndicate, you obey the rules or face the howling consequences.
All the same, I will rise against the odds and follow the flaming force of revenge to salvation.
Or die trying…