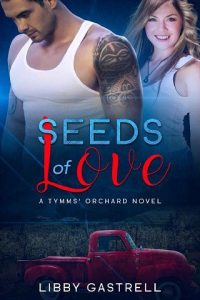 On the verge of financial ruin and the loss of his family’s orchard, taciturn Ryan Tymms hires tourist fruit pickers to cut costs so he can focus on saving the business. Just a few more years of single-minded focus and he can finally find the woman he longs to spend his life with. Just a few more years.

Elle is twenty-eight and exactly where she was at twenty-three: single, teaching seven-year-olds, broke. She has had enough. So she decides to join her serial-backpacking friend, Jess, on a three-month working holiday with accommodation. She is going to New Zealand to pick apples! No pressure, no marking, no men.
As Elle glances around her new home, however, her eyes are drawn to the brooding orchard owner, leaning against his truck and eating a crisp Tymms apple. Their eyes meet through the minibus window, and they both know their plans are now in tatters.
After weeks of denying the simmering attraction between them, a near-catastrophic boating incident forces the two together and Ryan and Elle decide to enjoy each other for the time they have before Elle returns home to life as she knows it.
They embark on a scorching affair, falling through the realms of lust into something altogether deeper.
Until Ryan faces a dilemma: orchard or Elle?
Will he sabotage his own dreams by letting fear control his actions?
With the not-so-gentle help of the hilarious Tymms siblings, Ryan must seek his true legacy: not the land itself, but the love that gives it meaning.