Home
Fantasy
Rise of the Dawnbringer by I.A. Takerian (ePUB) 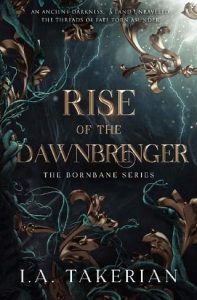 Rise of the Dawnbringer (The Bornbane #1) by I.A. Takerian – Free eBooks Download

The first book in I. A. Takerian’s high-fantasy series is a slow-burn romance that surpasses the bounds of time.

After living her entire life behind the white walls of the illustrious kingdom of Delinval, Princess Mara, niece of the great King Grathiel, understands what is expected of her. As her uncle’s only heir to the throne, she was raised to be a noble woman with a full understanding of the history of the lands of Zenafrost and the fallen kingdoms that lay beyond Delinval’s protected borders. But the political intrigue and endless theatrics that come with her birth-right have never suited her. Though she loves her people, Mara loathes the future her uncle has planned for her, and the approach of her twenty-first birthday brings with it a whole new horror: the expectation that she will marry a man of the king’s choosing. Mara believes this is the worst thing that could ever happen to her.
She’s wrong.
In the early morning hours before her birthday, she’s awakened by a living nightmare. A group of Dreads, the immortal dark magick users vanquished by King Grathiel twenty years before, have infiltrated the castle, and Mara is kidnapped from her own bed by a tall, dark stranger with dire motives. For the first time in her life, the princess finds herself outside the guarded walls of Delinval and witnessing, firsthand, the destruction the Dread’s corruptive magicks have wrought upon the land. The world is dying. Horrifying creatures stalk the barren plains and tainted forests. Foul rulers, defiled by diabolical magicks, vie for control. A mysterious ritual involving Mara herself seems to be Zenafrost’s only hope for survival. But when hidden truths about the past burns Mara’s life to the ground, can she somehow find victory in the ashes?