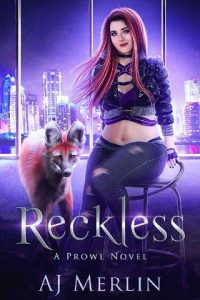 Maned wolf shifter Alek Sawyer is a pro at landing on her feet. From being dropped into foster care as a child, to tripping over her hopeless romantic tendencies as a teenager, she’s an omega with no need of an alpha or a pack. With a curvy figure and a mean right hook, she’s also not the omega that most alphas expect her to be.
But Hades, Roman, and Wilder aren’t ‘most alphas.’ When Alek is unexpectedly and irrevocably drawn to the exhibitionist panther, the quiet but firm coyote, and the secretive dire wolf, she can’t help but be reminded of the fairy tale romance she’s always wanted. But when things start heating up, she starts to realize her day dreams are drifting to some darker corners than she remembers. Corners with collars and cuffs and a strong dominating presence.
But her new romance isn’t all kinky games and bdsm parties. Her new alphas come with secrets of their own and lead lives that Alek has never considered for herself. At the end of the day, will their sudden and powerful connection be enough to keep them together?
Or will their pasts, or Alek’s own skeletons, force them apart?