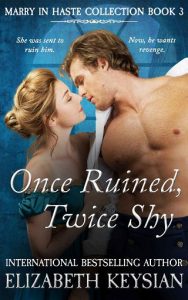 She was sent to ruin him. Now, he wants his revenge.

Miss Hestia Normanton hasn’t much further to fall. The man with whom she eloped refuses to marry her until she brings down his enemy, Conall Methuen, Earl of Corsbury.
Methuen, tortured by the untimely death of his fiancee, hides away from the world, injured and disfigured. Hestia’s arrival brightens his bitter existence, but interferes with his fundamental need to revenge himself on the man who stole the woman he loved.
Hestia’s lover Frederick, a man with a murky past, links both the living and the dead. Can Hestia stop Frederick and Conall destroying one another? And how can she avoid ruin all over again?