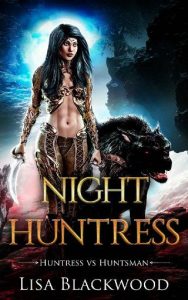 Sacrifice is no stranger to Seira of Blackstone. Yet her greatest sacrifice may require her to surrender the centaur she loves.
When Seira learns that a faction within the centaur royal court seeks to usurp the throne, she can’t allow Toryn to face the danger alone. Soon she finds herself journeying into the heart of centaur territory. Once there, she faces threats unlike any she’s encountered before, but as a warrior-priestess of the Moon goddess, she’s game to face any challenge.
Though when one of those challenges turns out to be a beautiful rival looking to steal Seira’s beloved huntsman’s affections, she discovers she is ill-prepared for this battle.
And with Toryn’s older brother assassinated, the centaur huntsman’s aging father knows his prodigal son may be next and needs to make a powerful alliance with a noble family. With that in mind, the king orders Toryn to marry one of the Night Huntresses—the unmated heirs of the most powerful noble houses.
The only woman Toryn wants is his fierce warrior-priestess, but denying the king isn’t an option. While the centaur huntsman desperately searches for a way to appease his father, safeguard the throne, and win the hand of his warrior-priestess, the assassins are moving ever nearer.
But Seira has her own plans.
And woe to any assassin or rival foolish enough to attempt to steal Crown Prince Toryn from the Night Huntress of Blackstone.