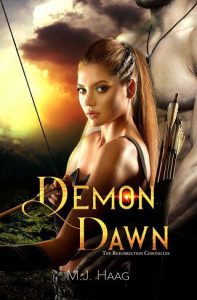 The world irrevocably changed after the hellhounds and fey appeared. Most people didn’t survive that first night. Dad had said we were lucky we did. I’m not so sure about that anymore.
With her father murdered before her eyes and her faith in the remaining humans shaken, Brenna reluctantly accepts sanctuary in Tolerance, a safe zone managed by the fey. The wall keeps the infected out. But it also keeps the humans in…with the very creatures that caused the world to break.
Big, grey, and ruthlessly deadly, the fey strike fear in the hearts of men and women alike. But Brenna finds one more intimidating than all the rest. Scarred and angry, Thallirin watches Brenna with an intensity that makes her relive the events that followed her father’s murder. She knows what Thallirin wants, and she’s never going to be used like that again.
Tormented by her past, Brenna sees no possible future other than eventual infection or starvation. There is hope, though. Her community is abuzz with a newly discovered way to protect women against the disease that’s turning people into zombies. However, it doesn’t come from a needle.
It comes from sleeping with the dark fey.