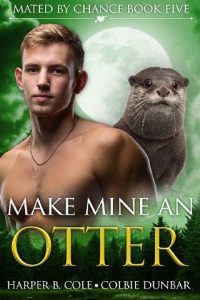 Make Mine An Otter (Mated By Chance #5) by Harper B. Cole, Colbie Dunbar – Free eBooks Download

Being alone has its advantages but not when you’re longing for someone to share your life.

Alpha shifter Finlay gave up a successful career in finance. He left the bright lights of the city behind and headed for the mountains where he built a home overlooking a river, which is a must-have for an otter shifter. Finlay spends his days making jewelry, which is a far cry from his former hectic lifestyle. He has no regrets except one: he has no mate.
Julian loves hiking, and he’s taken a two-week vacation to walk a trail by himself. The first week is better than expected with clear blue skies, stunning views, and fresh air. But with a cold front comes rain and a drop in temperature, forcing the omega to stay in his tent, and gives him ample time to question his life choices.
Finlay is used to solitude and rarely has visitors. When two strangers arrive at his door, he’s wary but welcomes them into his home, while Julian wakes up one rainy morning to find two men inviting him for breakfast in a tent they pitched next to his. Both the alpha and omega find messages after the pair depart, which give them perplexing instructions.
An alpha and an omega who both enjoy their own company find themselves living under the same roof. Can they find their way to be more than roommates?