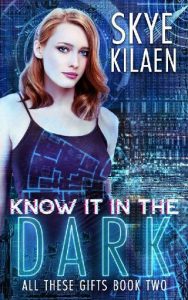 Jolie knows that Deneve staying in Austin is only temporary, especially when a government agency far too interested in people who developed powers from alien ship nanites may have its eyes on the city. Too bad Jolie’s heart doesn’t seem to be getting the memo that Deneve won’t be around forever.
Deneve’s nanites won’t let her leave town, but without any precognitive visions of what catastrophe she’s supposed to avert next, she’s at loose ends. She’s also spending too much time close to Jolie, the beautiful woman who saved Deneve’s life with a wall of fire.
When an attack connected to a secret from the alien ships leaves someone dead, Deneve’s visions come back with a vengeance. But surviving the confrontation that follows is going to take more than seeing the future. Deneve and Jolie must start trusting the growing connection between them… and confront the truth about what happens when their powers combine.