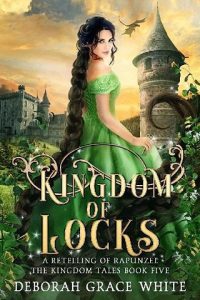 Aurelia carries the most powerful weapon in the kingdom—she just can’t wield it
Stolen as a baby by an egotistical enchanter, Aurelia has spent her entire life locked in a tower, her impractically long hair serving as a vessel in which her captor can store his magic. Every day is predictable—at least, until Cyfrin’s manner and experiments take an inexplicable turn. Now Aurelia’s biggest challenge is convincing her fellow prisoner—the only mother she’s ever known—that she’s strong enough to handle the truth behind the enchanter’s strange behavior. The trouble is, she’ll first need to convince herself.

Prince Amell might be known for his restlessness, but he’s grown out of his childish dreams of heroics…mostly. When a break out occurs at the prison containing all the continent’s criminal magic-users, he’s eager to join the manhunt. Little does he expect that, with the somewhat perplexing help of some dragons, he’ll find something else entirely, lying hidden in the heart of his kingdom.

But the magic that holds Aurelia and her mother captive is like nothing Amell has seen before, and his failure to rescue them shows how far he actually is from the hero of his childhood fantasies. Both Aurelia and Amell will have to find a strength they didn’t know they had in order to overcome the dark schemes in which Aurelia has played an unwilling part. And if they fail, more futures than hers will be lost to the man who stole her past.