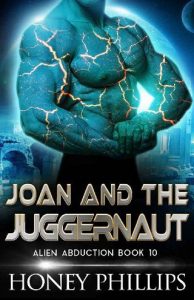 Varga’s life has been as hard as the armor which covers his skin, but he has never let it stop him. He has powered his way through every obstacle – until a favor for a friend sends him straight into the path of a stubborn, beautiful female, and everything changes.
After finally freeing herself from her domineering ex-husband, Joan is ready to start a new life on her own terms. Instead, she is kidnapped by aliens and sold into servitude on a mining planet at the far end of the galaxy.
When a terrifyingly attractive alien appears with promises to rescue her, she isn’t foolish enough to refuse. But the massive, scarred warrior wants more than her freedom – he wants her heart.
As Varga and Joan lead a ragtag group on a dangerous journey to freedom, can they also escape the ties of the past and find a new future – together?