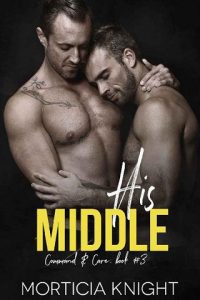 When a middle inherits a kink club, he’s terrified. Can his dad’s best friend rescue the business while also protecting him from danger?

Unexpectedly losing his father is devastating, but when Noah’s dad leaves him the wildly successful Club Playpen, it’s more responsibility than he can face. Noah’s business skills are nonexistent and his interest in taking charge is zilch. The pressure to keep the club open has him scrambling to find someone to take over, but who does he dare trust with his father’s legacy?

Sawyer is stunned by the death of his best friend. His heart also aches for Noah, who insists he can’t handle the obligation of running his dad’s popular club. When Noah begs him to take on the role of manager, Sawyer is faced with an uncomfortable dilemma. He’s been attracted to Noah from the moment he laid eyes on him. However, his best friend made Sawyer promise he’d never cross that forbidden line.

As Noah and Sawyer dance around their growing desire, Sawyer struggles to remain true to his vow. Then outside forces interfere and threaten the future of the business, and Sawyer rushes in to keep Noah safe. Will Sawyer save the club before it’s too late? And will he abandon his oath to his best friend and claim his boy?