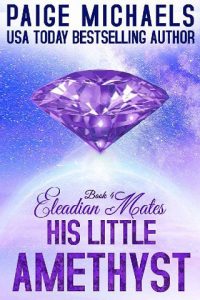 Ever since Janie’s best friend was chosen by an Eleadian male and left Earth, Janie has been working long hours nursing and living alone. When a mysterious illness puts her in the hospital, modern medicine proves unable to combat the virus.
Thabo has come to Earth to find his mate, and he’s brought a letter from Olivia to her friend Janie. He’s read it too, and he’s not sure he should give it to her. Olivia revealed far too many details about Eleadia.
But Thabo’s intuition suggests Janie may very well turn out to be his mate. When he finds out she’s sick, he insists on having her brought to him. It’s risky. Females aren’t permitted on the floors above Club Zoom unless they’ve been chosen.
Eleadian medicine is far more advanced. Curing Janie isn’t a problem. Claiming her as his own in the process isn’t a problem either. She wasn’t very lucid when she signed the waiver, but she’s his now, and life as she knew it will never be the same.