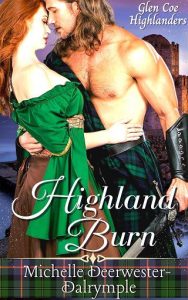 He’s been betrothed to a supposed spy. Her safety is at stake because she’s aligned with his greatest enemy in the Highlands. An enemy that robbed him of his closest kin.

♥ Can they put their traumas behind them and build something new in the Scottish Highlands from the ashes of the past? ♥

Reade MacDonald, Laird MacDonald’s son, hates the Campbells and everything they represent. Supporters of a foreign king on the Scottish throne and murderers of his dearest friend, the Campbells are a plague in the Highlands. Brash and thick-headed Highlander warrior Reade does all in his power to subdue the Campbell threat.
Then the widow Blair Gordon enters his life.
The comely widow is caught in a web not of her making, and once again finds herself at the mercy of powerful men who forcibly decide her fate.
Now Blair’s fate is to wed Reade, both for her protection and in hopes she might know something of her dead husband’s treasonous activities.
But she knows nothing. And Reade doesn’t believe her. Yet the more time they are forced to spend together, the passionate desire they can’t control becomes louder than any misguided beliefs they have for each other.
The past, however, doesn’t like to remain buried, and when the Gordons and Campbells try to use Blair against the MacDonalds, all of Reade’s hopes for a future with her come crashing down and puts all their lives as stake.
Can Reade save himself and Blair, and let the ashes of the past remain buried? Or will the conflict in the Highlands wound more than just their hopes for happiness?
Genre: Fiction > Romance | Historical