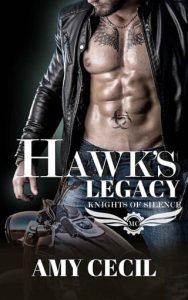 Every hero deserves a legacy…

Hayden “Hawk” Carrero was a family man who worked hard and provided a good living for his family. He kept to himself and stayed out of trouble… until the unthinkable happened. With everything he loved ripped away, he set his sights on revenge.
Hawk only had one option to get the kind of help he needed, even if it leads him down the path of a dark and dangerous world. Driven by determination, he turns to the Knights of Silence MC. The club agrees… with stipulations. After Hawk claims revenge on the savages who killed his wife and daughter, he agrees to spend the rest of his days a loyal member of the MC.
In the years that followed, Hawk’s heroic legacy was forged.
Now, Lucas—a son Hawk never knew he had—wants to join the club to learn more about his father. Lucas soon learns club life isn’t as glamorous as he thought, and comes with dangers he never could have imagined. He never intended to fall in love with the MC President’s daughter, but finds himself faced with a crushing choice. Does he follow in the footsteps of the father he idolizes? Or work to win the heart of the woman he loves? Is it possible to have both and maintain loyalty to the club?