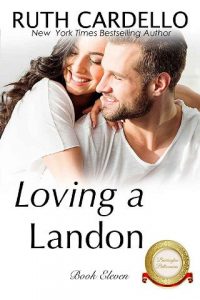 Benjamin Drover thought he’d found love until his wife joined the Marines and was killed in action. He’s spent the last year, hating everyone—including himself. On the anniversary of his wife’s death, he receives a letter from her asking him to donate her entire inheritance to the Landon Foundation.

He’s angry with her for leaving, angry with himself for not moving on, and driven beyond fury when the always irreverent Clay Landon refuses the donation.

Born to one of the world’s wealthiest families, Clay’s sister, Caterina has had anything but an easy life. After losing her parents and one of her older brothers, the ultimate betrayal came from Clay himself. What he did to her, how she suffered because of him, was something she is still recovering from. She doesn’t regret walking away from her inheritance, but she is tired of the past controlling her. It’s time to face it, face Clay, and finally begin to heal.

Her whole life is upside-down. It’s definitely the wrong time to meet the right man.
Caterina’s pain tears through Benjamin’s anger. He wants to help her, but first, he must heal his own wounds. To keep her, he’ll need to become the man he always should have been.

This time, when the woman he loves announces she’s going to battle—he’ll go with her.
And if Clay Landon survives, he just might get to play Fairy Godfather one more time.