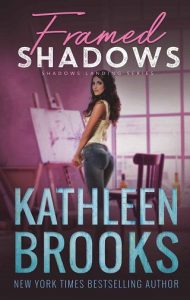 Tinsley Faulkner loves art more than anything in the world. She’s a painter and owns an art gallery in the small town of Shadows Landing. But suddenly her life is changed when a man walks into the gallery looking to sell some art—art she knows is stolen. What she thinks is just a one-time thing quickly escalates into something so dangerous people have died for decades to protect it. Now Tinsley finds herself fighting for more than just her life, but to correct a historical wrong that’s affected generations of people.

FBI Special Agent Paxton Kendry had just been transferred, against his will, to the Art Crimes division in Charleston from Atlanta’s violent gang task force. Something about his transfer never sat right with him, and he’s determined to get to the bottom of it. Only Tinsley Faulkner keeps sidetracking him. Instead of ignoring the feisty artist, he finds their verbal sparring matches invigorating. Until one day Tinsley stumbles onto something bigger than either of them could imagine.

Now it’s up to Paxton to protect Tinsley as she finds herself in the middle of the most dangerous art heist of the century. But can he protect his heart along with her life, or will they disappear like the art Tinsley is willing to die to protect?