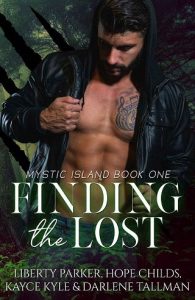 Home to supernaturals of all types, it’s protected by a warding spell, somewhere off the coast of Galveston, Texas. The men, known as Warriors, and the women, known as Guardians, protect the human race from enemies they often know nothing about and, based on the fact that no one except supernaturals know about Mystic Island, they’re obviously successful.  Children grow up and are taught about their abilities as well as the responsibilities they carry toward humans. They’re loved and cherished, maybe even spoiled somewhat, as most kids are. But someone out there has a nefarious plan. A group of rogue supernaturals are kidnapping human women, getting them pregnant and allowing them to give birth before they spirit them away to be raised. Their goal? To overtake the humans and take over the world.

Vaughn, a social worker, as well as her best friend, Shyla, are working tirelessly to locate the missing half-human, half-paranormal children and return them to the island so they can be raised to become what they’re meant to—either Warriors or Guardians—in order to protect the humans. Trigger, the new sheriff in town, has his own battles he’s facing. The issue among the island is that somehow, some of the rogues are getting onto and off the island completely undetected. The other issue? The grizzly that resides within him is convinced that Vaughn is their mate. As the stakes mount higher, can Trigger find out who is betraying their kind and bring them to justice? Will they figure out a way to trace and track these children born in such dire circumstances and save them? Will Trigger’s bear win the argument with respect to Vaughn? Does Vaughn even want a mate herself?

Special Note: Each book in this series will deal with a specific couple (as is typical) although you might see hints of other couples, and one piece of the puzzle will be revealed. So, if there are things you don’t feel were addressed that were uncovered, rest assured, they’ll be covered in a future book! Happy reading; we hope you enjoy our foray into the supernatural!