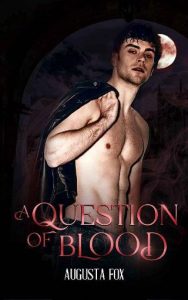 A Question of Blood by Augusta Fox – Free eBooks Download

Ivy gave up everything to study vampires, but she never expected to be claimed by one. That changes when a research trip to Budapest throws Ivy into the path of the suave, sexy Daniel Munteanu.
The wayward son of an elusive vampire dynasty, Daniel was just supposed to answer a few of Ivy’s questions. A few burning questions turn into a fiery desire — a desire that puts Ivy in a dangerous position.
Daniel severed himself from his vampire family, but he can’t escape the curse of his bloodline. He is fated to fall in love with a human mate. As soon as he lays eyes on her, he knows Ivy will be his. Her blood ignites a passion within him beyond anything he could have imagined.
Yet just as they cross paths, a series of violent murders threatens their growing bond. A rogue member of the Munteanu clan has returned to Budapest in search of a mate. If Daniel doesn’t claim Ivy soon, this bloodthirsty killer will.
Can Ivy convince Daniel to take her as his mate, even if being with him puts her in danger? And will Ivy be able to make him see that trusting his estranged family is the best chance they have of surviving — and of staying together?