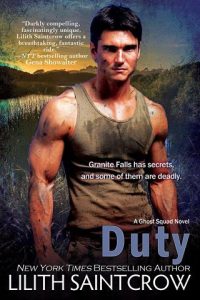 Granite Falls has secrets, and some of them are deadly. After nearly dying on his team’s last mission, Paul Klemperer is heading home for the first time since signing up for the Army. His hometown’s grown a little. The inhabitants are older. And life has moved on, but some things are still the same. Like the way he feels about the girl he left behind—who ended up marrying someone else.
Beck Sommers has a divorce in the works; if she can just hold on, she’ll be able to leave this godforsaken town. Unfortunately, her soon-to-be-ex-husband has other ideas. Her first love Paul has returned as well, making things even more complicated. And then there’s the corruption, the drugs…and murder.
Beck’s determined to fix what’s gone wrong, but she has no idea how deep the corruption goes. And Paul? Well, he’s a little behind on the local news, but one thing’s for sure—he’s not letting Beck get away this time.
First, though, he’ll have to keep her alive…