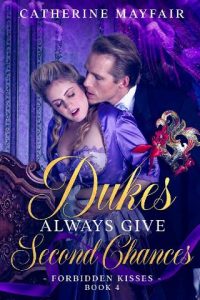 Sally Matthews once loved William, a man far above her station. With a promise of marriage and love never ending, all was ruined the day his father sent her away. Now dedicating her life to helping others, Sally is called to return to her hometown to investigate rumors of scandal. Taking along a mask as well as skills of espionage and seduction, she has hopes of seeing William again.

William Ridgemont, Duke of Everly, is not only haunted by persistent rumors but also by the loss of Sally, the woman he once loved. Though he would give anything for a second chance with her, his sights are now set on the town in which he lives and the scandalous parties he attends while hiding behind a mask.

When Sally learns William may be part of a secretive group led by an earl who sells female flesh, her dreams of reuniting with William fade. Though she will have to bring down the duke she once loved, she first must be able to resist the masked man known as Wolf, whose lustful gazes and possessive kisses have awakened desires she finds hard to resist.