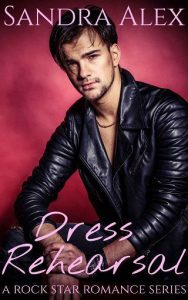 The tormented guitarist. The fearless security guard. The kiss that’s seen globally. The razor blade that threatens to end everything.

Billy Nestor has everything he’s always wanted: a band, the best guitar skills, a creative edge like no other, a thick skin, and the chops to climb the charts. The one thing he’s missing is a supportive father. While his mom is his biggest fan, his father has chided him since the day he picked up an instrument, slating that the boy would never amount to anything unless he applied himself to something other than heavy metal.

Michelle Parsons has seen the world through the eyes of the battlefield. She’s determined, tough as nails, and has enough brains and drive to get her anywhere she wants to go in the world. Until she gets fatally shot in combat and has to take a backseat job as a security guard for a nothing band, and what’s worse, she gets the job after her dad calls on a friend for a favor. Despite the disappointment, she quickly learns that protecting a band is almost as exhilarating as dodging landmines behind enemy lines.

In the band’s third month of touring as an opening act, the city that they play in is riddled with an unexpected, potentially life-threatening situation. Michelle has to put her life on the line once again, only this time, without her hard hat and camouflage. After getting the band on the stage safely, a certain band member seeks her out once the applause quiets, and a fast friendship evolves. Billy finds himself seeking Michelle out, escaping the sheltered life inside the hotel room, until Michelle and Billy come to an impasse on a serious topic, one close to Billy’s heart. But little does Billy know that Michelle has also become close to his heart, and he doesn’t realize it until she climbs onto the shuttle bus to go back to the airport…out of his life forever.

A heartbreaking, true-to-life story about the trials and tribulations of being a rock star, and falling in love unexpectedly, with someone you would never have expected to fall for. A story that covers sensitive subject matter, readers will see rock stars in a whole different light, and the people that love them, too. Dress Rehearsal has sensitive scenes, violence, course language, drug use and graphic sex, so please be forewarned. Billy and Michelle’s story is a standalone that will leave you laughing, crying, and rooting for the main characters as they take you through their journey of love, heartbreak, success and triumph.