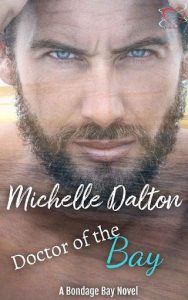 When his wife leaves him for a younger beau, Doctor Jason Hill leaves the country of his birth for rural small-town Australia. Determined to live a quiet life, he buys the local clinic in Bondage Bay and sets about making changes but doesn’t bargain on a feisty nurse and her unexpected effect on him.
Simone Parker does not believe in love. Her parents cured her of that early on in life. But she does own a healthy sexual appetite which doesn’t include the need for commitment in any form, shape, or size – not until a new Doctor arrives on the Bay.
Jason has his sights set on Simone. He’s only goal besides making his practice a success, is to make Simone his, forever. And to complicate matters, the firebug responsible for the Christmas fires leading to the destruction of half the Bay has returned with a vengeance.
Finding that their chemistry simply won’t subside. Simone let’s go of her fears and gives in to the handsome doctor.
But as usual, small towns are always havens for gossipers. Will his secret ruin his success? Will the arrival of a foreign stranger end the only love Simone has ever allowed herself to know?