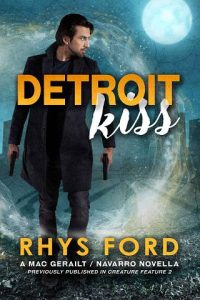 For Javi Navarro, Detroit will become another blood-splattered city in his rearview mirror after he puts its dead back into the ground. Expecting an easy hunting job, Javi instead finds a kiss of ancient vampires on the hunt for a descendant of their long-dead creator.

Reclusive Ciarnan Mac Gerailt abandoned his family legacy of blood and death magic after it nearly destroyed him. Unfortunately for Ciarnan, the Motor City can only be saved if he resumes his dark arts and joins forces with Javi Navarro, the hunter who brought the vampire apocalypse—and hope for the future—straight to Ciarnan’s front door.