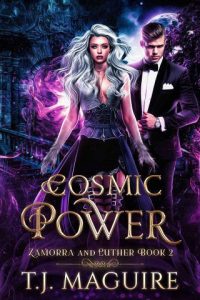 After years on the run, Zamorra’s past has finally caught up with her. She thought she was safe. Had a place to call home. Friends to call family. But it was all an illusion. She was never safe. He was always there in the background, searching for her like a stalker in the night. Barnabas Baxter, the shifter who murdered her parents and destroyed her whole life.
She thought she knew the reason why he hunted her, why he was so intent on capturing her, but she was wrong. So fucking wrong.
The day Zamorra was kidnapped, Luther’s whole world turned into chaos. As Vampire Regent of Australia, he had a wealth of responsibilities, including finding the culprit responsible for Night Flare. But he couldn’t bring himself to care about any of it. The only thing that mattered was getting Zamorra back by any means necessary.
When new information comes to light, something neither Zamorra nor Luther could ever have foreseen, it puts their entire world in jeopardy. Vampires, Shifters, Demons and Mages will have to put their differences aside and come together to defeat a vicious new enemy. One so dark, so evil, they were unlike any creature they’d ever seen before.

Author Note: This book is NOT a standalone. In order to understand the events in this book, you first have to read Alpha Power. This book contains a feisty heroine who doesn’t take crap from anyone and a dark, delicious Vampire King. It is book two in the series. There’s harsh language, extreme violence and graphic sexual scenes. It is not suited for anyone under the age of 18.