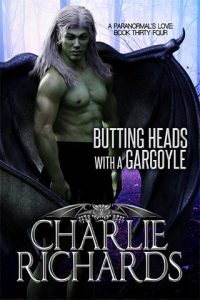 Into the Paranormal World: While coordinating their defense against paranormal hunters, a vampire meets a gargoyle who will turn his life on its head.

Ridger Carruthers watches his best friends find their beloveds in members of the nearby gargoyle clutch. Having met all the males, he knows none of them are his own. He doesn’t think anything of it when he zips over there to deliver electronic supplies.

Joining the gargoyles for a meal, Ridger comes face to face with someone new—the visiting gargoyle elder, Vermidian. The male is quick to declare that Ridger is his mate…as well as demand that he leave Wyoming to live with him in Ohio. Beloved or not, Ridger gives in to his knee-jerk reaction and tells him no.

As an elder, Vermidian can’t remember the last time someone refused his command. To hear his fate-given mate tell him no shocks him, but that doesn’t mean he’s giving up on the vampire. Instead, Vermidian invites himself to stay at Ridger’s coven, with a pair of Elder Enforcers in tow.

With so many dominant personalities in one place, Ridger and Vermidian hit bumps quickly and not just with each other. Can they learn to communicate in time to save not only their relationship but the coven and clutch from hunters, too?