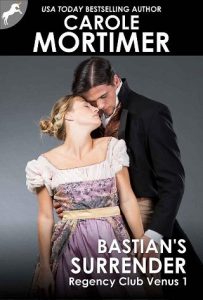 As Lord Sebastian Forbes, the Earl of Shaftesbury, and one of the richest men in England, Bastian has always lived a charmed life. Until three months ago, when a man died because of Bastian’s actions. Knowing the other man to be a widower with a child, Bastian now feels it is his responsibility to care for the orphan. Except the child has disappeared into the foggy streets as if they had never been. Unfortunately, Bastian has no idea if it is a boy or a girl, only that he has to find and save them from the harsh reality of London’s scandalous underworld.

Having searched for the child for all these weeks with no success, Bastian’s actions, drinking and debauching too much, are becoming increasingly risky and dangerous to himself. To the point he awakens one morning secured naked to a bed and no memory of how he came to be there, with a beautiful golden-haired angel leaning over him wielding a knife.

Abigail is under no illusions regarding her place at Club Venus, she knows she is nothing more than another one of the ‘ladies’ available for the pleasure of the gentlemen who frequent the establishment owned by the aristocratic Duke of Blackborne.
She’s only lived at Club Venus for a few days and is shocked to come down the stairs in the early morning of the third day to discovering a naked gentleman in one of the public bedchambers, secured to the bed by four leather straps.
She easily recognizes this man as being Lord Sebastian Forbes, the Earl of Shaftesbury, and one of the Duke of Blackborne’s closest friends.