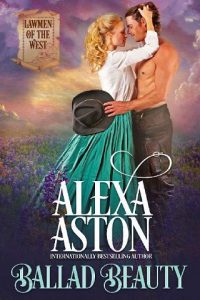 A lawman chasing down the man who almost charmed him into a life of crime.
An abandoned daughter finally reuniting with her beloved father.
Two individuals seeking the same man—for a very different reason . . .

After ten years apart, Boston schoolmarm Jenny McShanahan receives a letter from her father that instructs her to join him in Texas. She has no idea that he’s become Famous Sam McShan, the Robin Hood of the West. She arrives to find Sam already gone, but he left instructions for Jenny to hire a guide and rendezvous with him in Nevada.
Texas Ranger Noah Daniel Webster knows Sam personally because Noah’s father—Pistol Pete Webber—was Sam’s longtime partner in crime. When Pete is killed during their last big score, Noah requests the assignment to bring Sam to justice. Going undercover, he volunteers to act as Jenny’s escort across the dangerous prairie, using her to track her outlaw father’s location.
As they journey through rough country, love blossoms—but Noah knows the second he arrests Sam, his betrayal will kill Jenny’s love for him. Should the lawman do his duty as a Ranger, or should he let love rule? The choice Noah makes will change their lives forever.

Ballad Beauty is a standalone western historical romance from Alexa Aston’s Lawmen of the West series, which features heroes of the American west in various law enforcement positions and the strong heroines who bring love into their lives.
*This is a second addition of Ballad Beauty, which was originally released under the pen name Lauren Linwood.