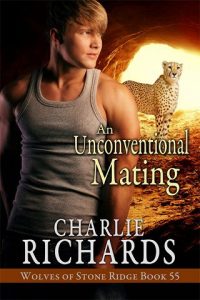 Clayton Zukan is a skilled bomb maker, but he’s careful to only sell his devices to those with a worthy cause, or so he thinks. He learns about shifters when an assassin disarms one of his devices and tracks him down. After his brother mates with a shifter, Clayton does his best to hide his jealousy. After all, Clayton would love a mate of his own. The wolf shifter pack is kind enough to build Clayton a large shop with an apartment over it, so he throws himself into his work. It’s pretty remote, and he likes that, so he doesn’t have to watch all the mated couples’ sickly sweet antics. Taking a hike, Clayton comes face to face with an animal that shouldn’t be living in the mountains of Colorado—a cheetah. When the beautiful animal transforms into an even more gorgeous man, Clayton feels the mate-pull, and he’s overjoyed. Fate has brought him his very own shifter. Except, the sexy man—Bailey Dyer—claims not to know what a shifter is. When explanations begin, can Clayton convince Bailey that paranormals are not the enemy, especially after learning that Bailey volunteered for the experiment that turned him into a shifter?