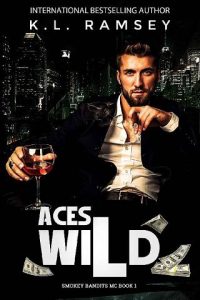 Taking another man’s woman was a sin punishable by death—especially in the Royal Bastards. The Smokey Bandits Prez should have killed his friend for taking his Ol’lady, Charity, and his infant daughter. His friend could keep Charity, but Ace wanted his kid back. When Charity’s sister, Trinity, showed up with his kid in tow, he thought it was his lucky damn day. He didn’t count on the sexy lawyer forming an attachment to his kid and he certainly didn’t plan on falling for her, but Ace needed her help and he planned on taking everything Trinity was offering him. When trouble showed up on his doorstep, threatening to take away his daughter again, Ace was prepared to lose everything he’d built to keep both Trinity and his daughter safe. He’d walk away from the Bandits, give up his casino, and give away his entire empire before he let anything happen to either of them. Ace could play dirty. He was ready for the fight of his life, no matter how dirty it got. He knew how to play the hand he was dealt and in this game, he was holding all the cards.